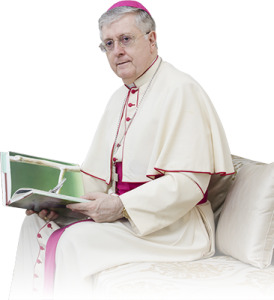 The Most Reverend Giambattista Diquattro,  Apostolic Nuncio to India

Developments of the Holy See’s Representation in India

A Brief History about the Apostolic Delegation

The history of the Catholic Church in India is very extensive. It traces its origin in the preaching of the Apostle St. Thomas, who, according to tradition, came to India in 52 A.D., and was martyred in a place called Mylapore near the present town of Chennai (Madras), where his tomb is found. From various records of travelers we know the existence of isolated Christian communities in India already in the year 345 (Travancore). In the 9th century the patriarch of the Nestorians in Persia sent bishops toIndia. There is a record of an Indian bishop visiting Rome in the early part of the 12thcentury.

The Apostolic Delegation to the East Indies was established in 1881, and included Ceylon, and was extended to Malaca in 1889, and then to Burma in 1920, and eventually included Goa in 1923.

On 12 June 1948 this Delegation was raised, by Pope Pius XII, to the rank of an Internunciature, and eventually became a Nunciature on 22 August 1967, during the pontificate of Pope Paul VI.

The Holy See’s Representation in India began with the establishment of Permanent Apostolic Delegation to the East Indies on 25 September 1884 when Pope Leo XIII appointed Archbishop Antonio Agliardi as Papal Representative.

On 12 June 1948 the Apostolic Delegation of the East Indies was raised to the rank of Apostolic Internunciature (interim nunciature) by Pope Pius XII. It was headed by Prelates appointed and sent by the Pope as diplomatic representatives of the Holy See. They belonged to the second class (after Nuncios) of Holy See diplomatic representatives, with the rank of an envoy extraordinary and minister plenipotentiary and they were officially known as Apostolic Internuncios (Vienna Convention on Diplomatic Convention, Art. 14 para. b). At present there are no Papal Representatives bearing the title of Internuncio.