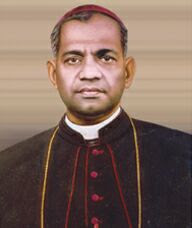 Archbishop Mathew Kavukattu (17 July 1904 – 9 October 1969) was the first Catholic Archbishop of Syro-Malabar Catholic Archdiocese of Changanassery. He was appointed archbishop in 1951 and served until his death. He was named a Servant of God in 1994.

Mgr. Kandathil, born in 1904 in Chembu near Vaikom, received the priesthood in 1933. He established a leprosy hospital in Cherthala in 1942, and the Assisi Sisters of Mary Immaculate (ASMI) in 1949. He passed away in December 1991. Mgr Kandathil was known for his work among leprosy patients, which earned him the name ‘Kerala Damien’.

Fr Varkey Kattarath, born in 1851 in Punjaar near Pala, received priesthood at the age of 22. He founded the Vincentian Congregation on 20 November 1904 on the model of the Congregation of the Mission (C.M.), founded by St. Vincent de Paul in France with three diocesan priests, with the approval and encouragement of Louis Pazheparampil, the first Vicar Apostolic of Ernakulam.